This circular walk from Buxton takes in Corbar Hill trig point, Black Edge trig point and Combs Head. This Peak District walk will bag you 2 trig points and 3 Peak District Ethels, and at just under 12km it’s a relatively gentle walk over moorland above Buxton. 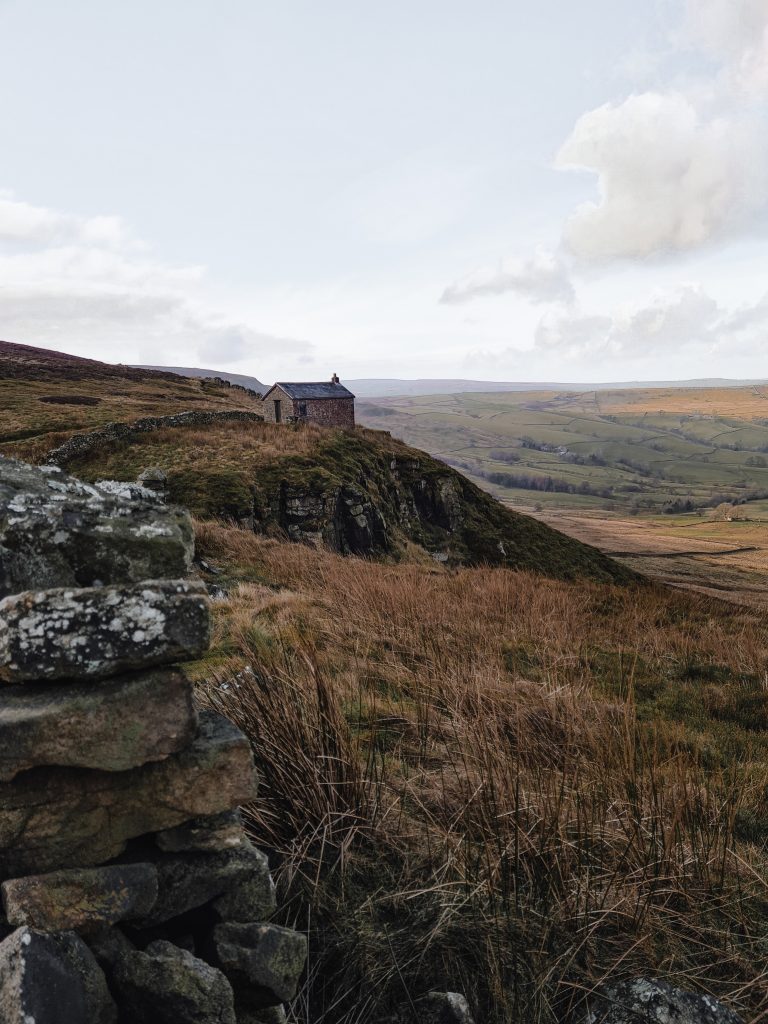 Here’s yet another multi Peak District trig point bagging walk! We’ve had these two trigs on our to do list for a while, so Mr R put together a nice little walk for us to get them both. We also ticked off 3 more Ethels, being Corbar Hill, Black Edge and Combs Head. Here’s the walking route for this lovely walk from Buxton.

Corbar Hill is a hill just outside of Buxton and is the site of the Corbar Cross, as well as the Corbar Hill trig point. Apparently this cross was the victim of vandalism a few years ago when someone took a chainsaw to it in protest at the Pope coming to visit, so now has a steel core running through it! At 437m above sea level, it’s not one of the Peak District’s highest peaks but it’s still a bit of a drag to get up to it. You can just see the path on the picture below, on the right hand side going up the hill. 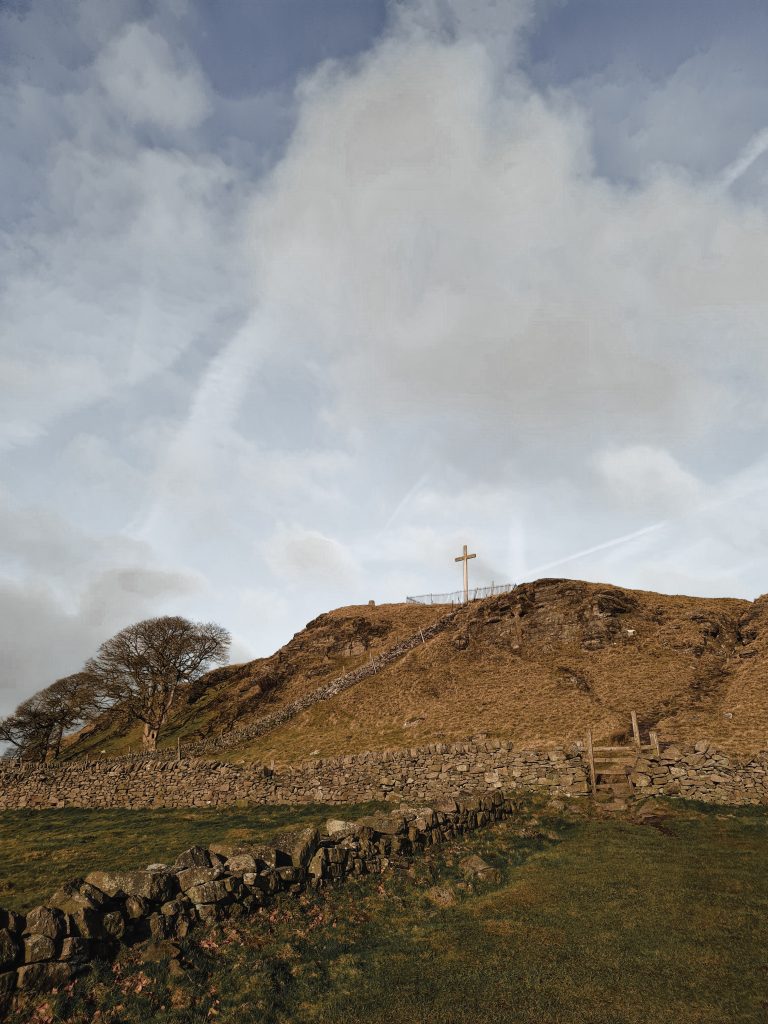 Park on Corbar Road, just near the entrance to Corbar Woods. Following the path up to the top of the woods, then the wall along the top of the woods, you’ll come to a gate leading onto the farmland below the Corbar Cross. Head over the stile and then scramble up the rocky outcrop until you’re level with the Cross and its compound. To get to the trig point you need to head over the stile into the next field where the trig can be easily accessed. Corbar Hill trig point isn’t actually one of the 88 Peak District trig points on my list, but it’s nice to get it anyway. 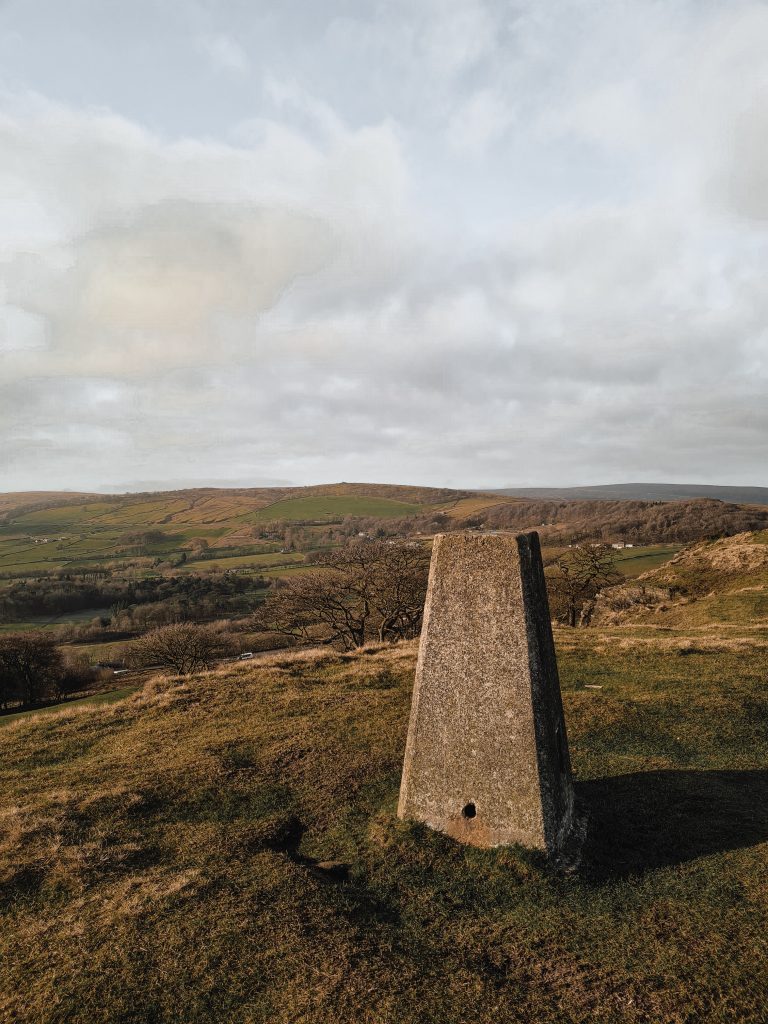 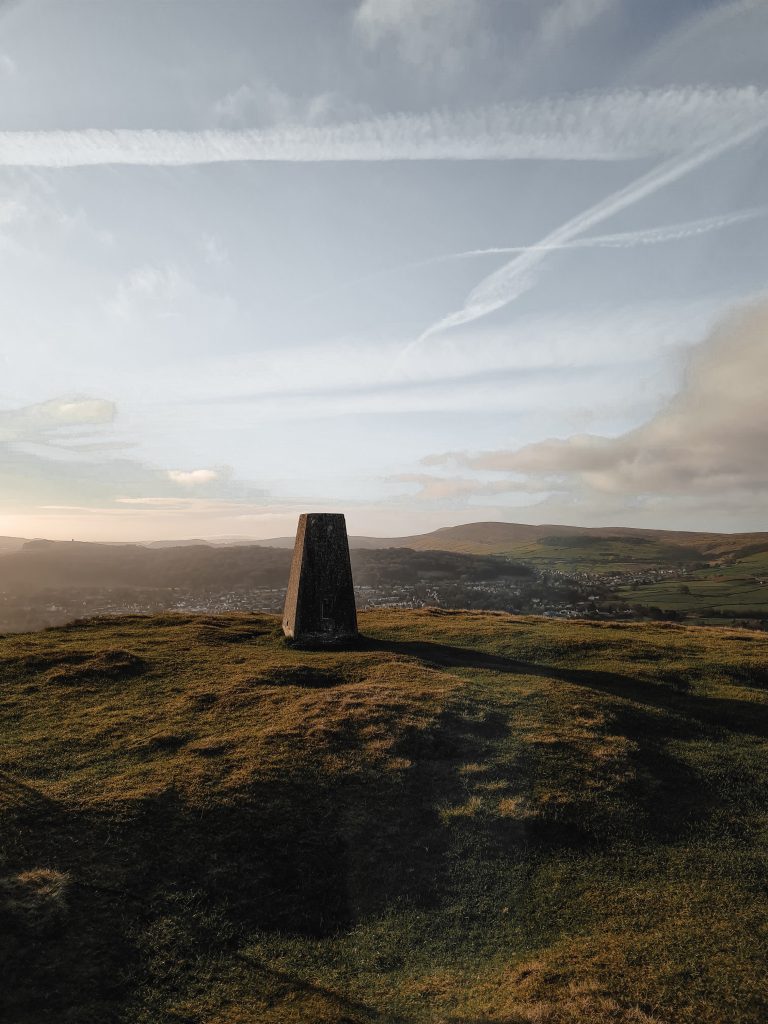 Photos taken, we headed off across the fields towards the moors above Buxton. The field drops downhill and in the bottom of the field is a large boggy area which was very wet. We tried to get across next to the fence but you’re best to get over the marshy bog near the middle. There is a faint path running up the hill on the other side of the bog showing where to cross. Following this path up through another small outcrop of rock known as Cuckoo Tors, you’ll eventually come to an opening in the dry stone wall where you can pop out onto the moors.

Following the path along the moors, you’ll walk alongside a small wood and come to Flint Clough, which is a pretty little stream. The path runs around the head of this, where it’s easier to cross, then climbs back up the hill onto Combs Moss. Follow the line of the dry stone wall for another 2km and you’ll pass the remains of a shelter. You should be able to just see the Black Edge trig point from here (on a clear day). 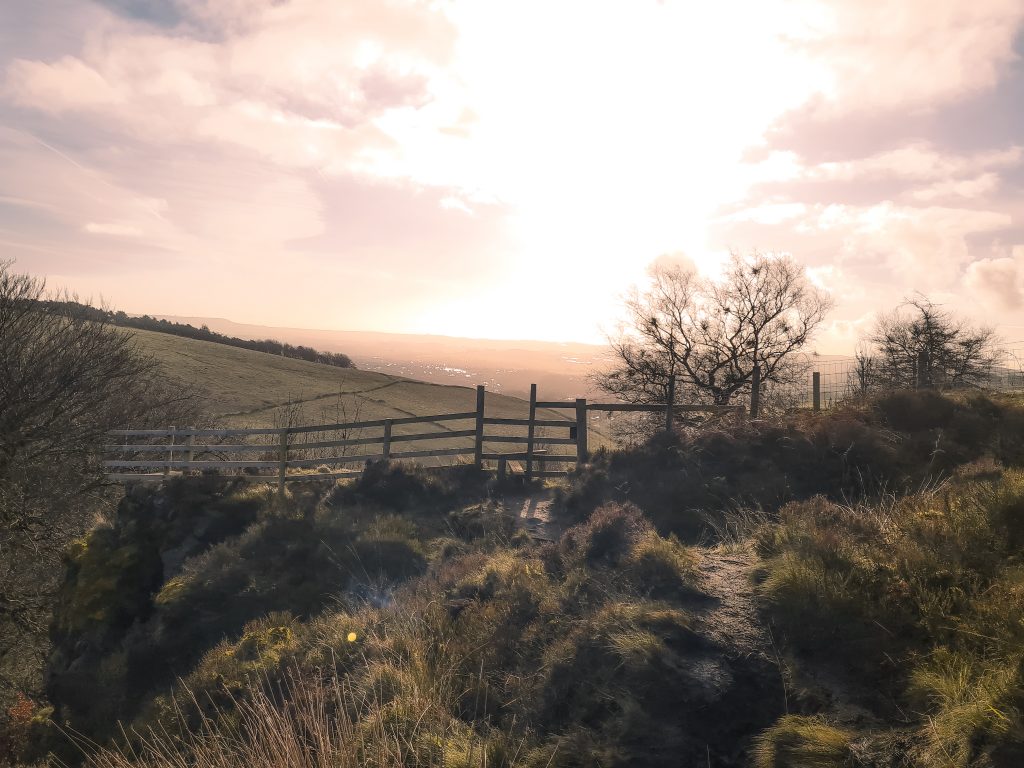 A fence near the top of Flint Clough 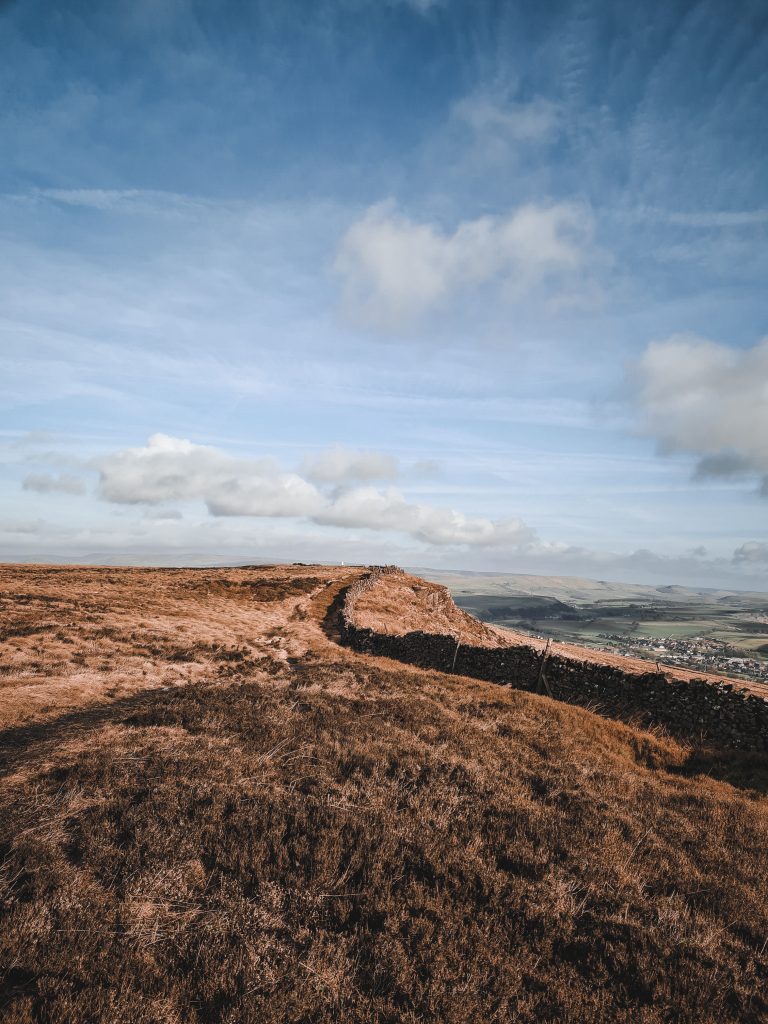 It’s a straightforward walk from here to the Black Edge trig point which has views down over Buxton and the quarry over the valley. Black Edge is 507m above sea level and is on the Peak District National Park boundary. 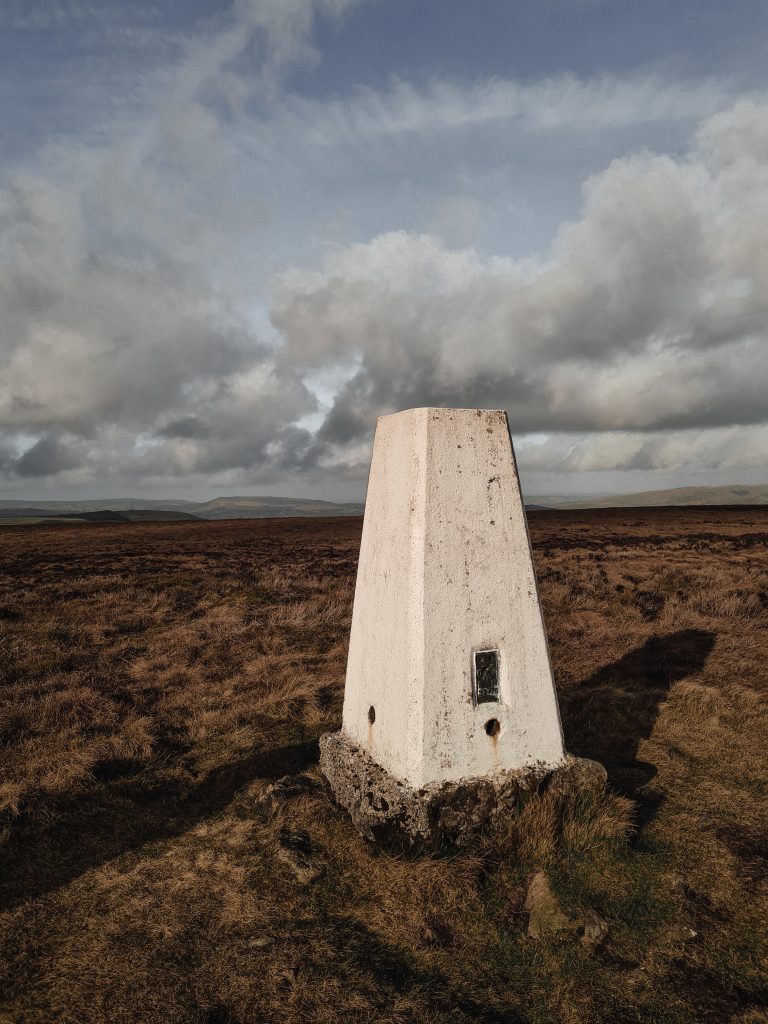 Retrace your steps back to the shelter mentioned before, and follow the line of the wall which runs north-west. There’s a line of stone grouse butts in the field to your left, and the path weaves down both sides of the broken down stone wall. One of the grouse butts has a seat in so you can have a little rest if you want to. 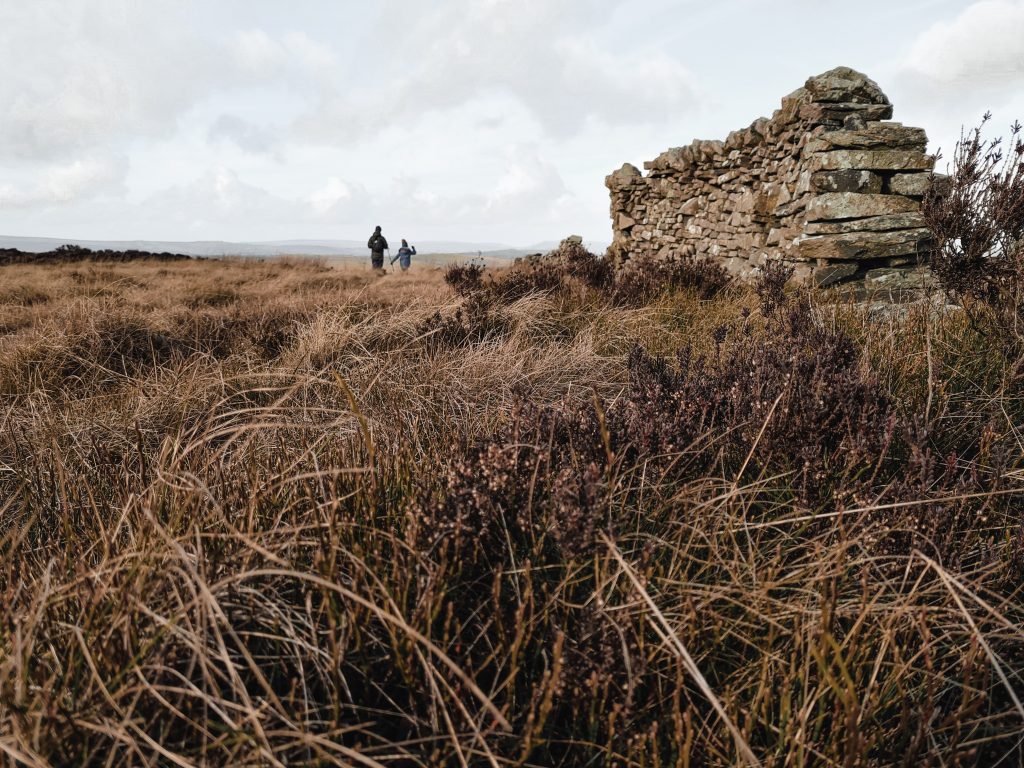 The path continues around past a little shooting cabin and bothy style structure, where there was someone having their pack up when we walked past! Walk along the ridge of Combs Moss, and you’ll come to a rock face which is popular with climbers. There is a rock here that looks like a mini Trinnacle! We stayed well away though as it was so windy. Opposite here is the rather underwhelming summit of Combs Head (503m above sea level) – there are no features to show where the Ethel summit is so your GPS will have to do! We use the OS App for planning our routes, and this is a great way to see if you’re at the summit or not. 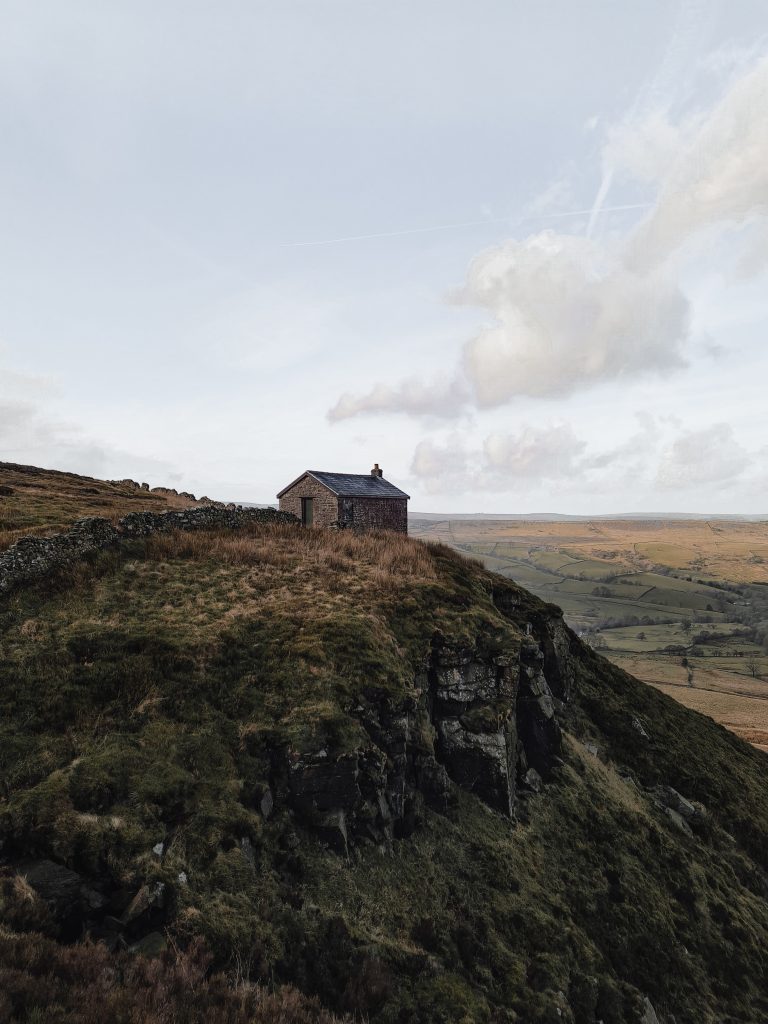 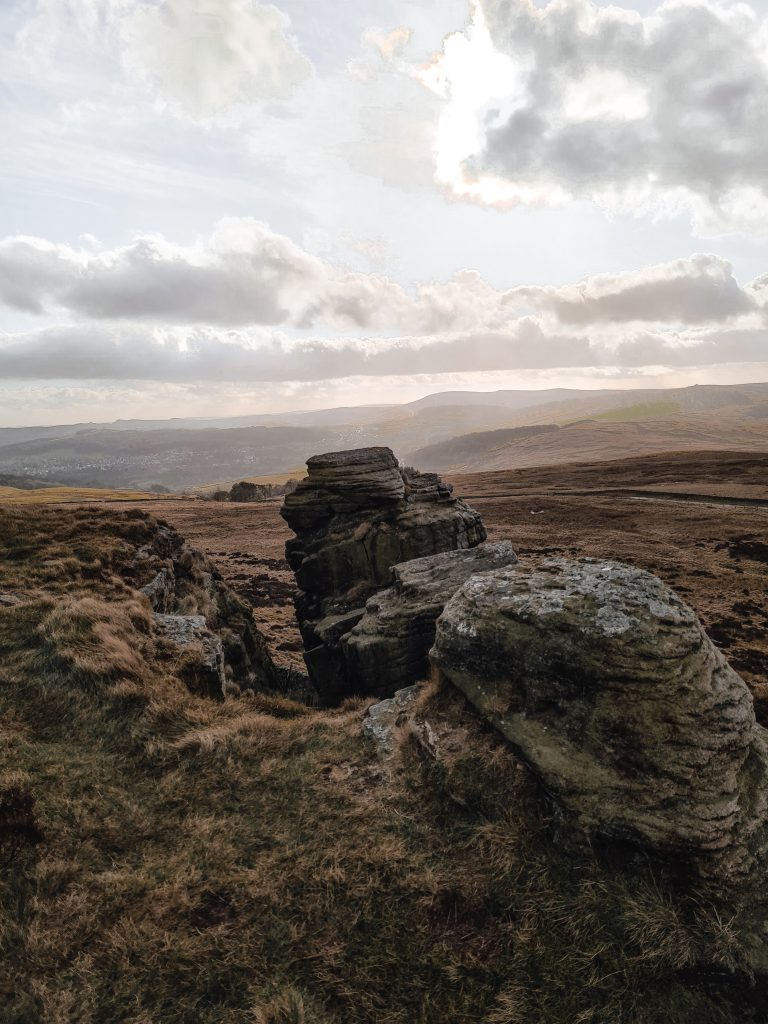 Follow the path back towards the wind turbine, and then head back through the gap in the wall to retrace your steps via Cuckoo Tor, the fields, Corbar Hill trig point and Corbar Woods. You’ll essentially walk in a rough square around the edge of Combs Moss moorland.

It’s a short walk or drive into the centre of Buxton where there are plenty of pubs and cafes, but we jumped in the car and headed back to Holly’s favourite pub, The Lantern Pike! She loves their crinkle cut chips!!

Parking: Corbar Road, Buxton SK17 6RJ. Don’t park on the road to Corbar Hill as it’s private, and be considerate to residents.

Facilities: None on the route but there are plenty in Buxton itself.