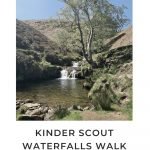 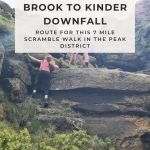 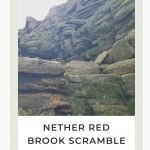 This Kinder Scout walk starts from The Snake Pass Inn and involves a steep scramble up Nether Red Clough onto Kinder Scout, before heading along The Edge to The Edge trig point then along to Kinder Downfall. It then takes you back down Fair Brook, home to a beautiful series of waterfalls and natural pools, so if you are looking for a quieter way up Kinder Scout, or a Kinder Scout waterfall walk, this is the walk for you. 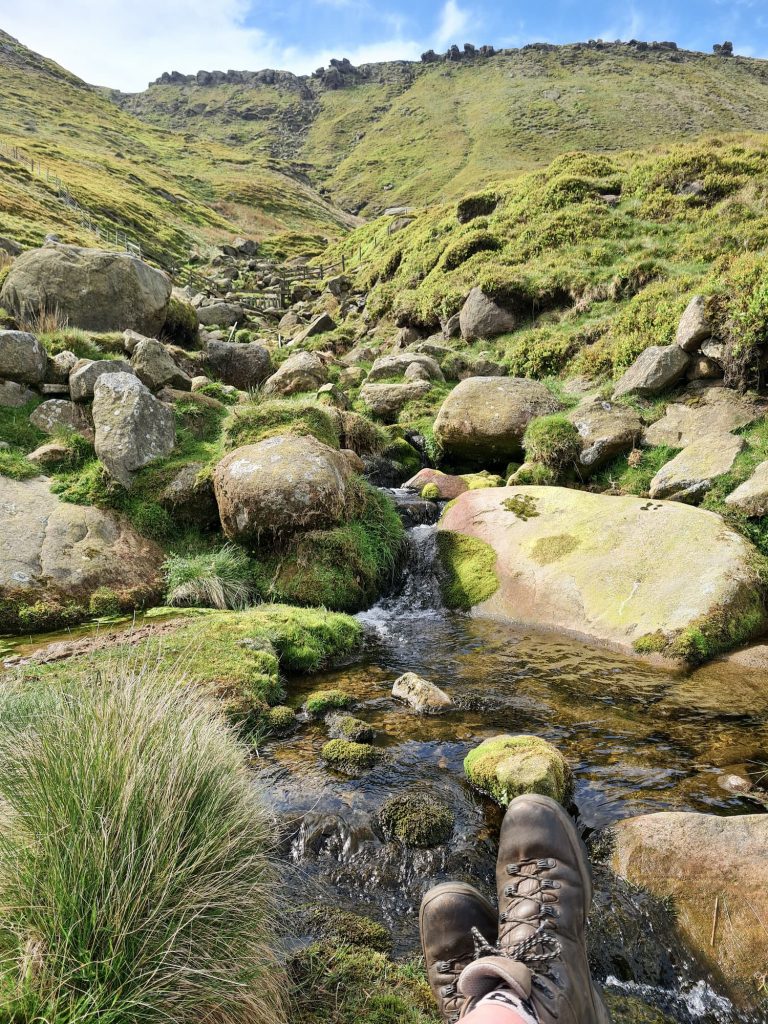 At 6.7 miles, this Kinder Scout route has lots to see, and is a great walk for kids who like a bit of an adventure.

I recently bought the book Scrambles in the Dark Peak by Tom Corker and Terry Sleaford which is full of amazing scrambles to do. They’re graded from 1 to 3 depending on difficulty. We love a scramble – they’re great fun and are a quicker way up onto some of the Peaks, whilst often being much quieter than the easier ways up. I let Holly choose a scramble from the book, and she chose the Grade 1 Scramble Nether Red Brook, so Joel made us a route which also included The Edge trig point, Kinder Downfall and the beautiful Fair Brook. 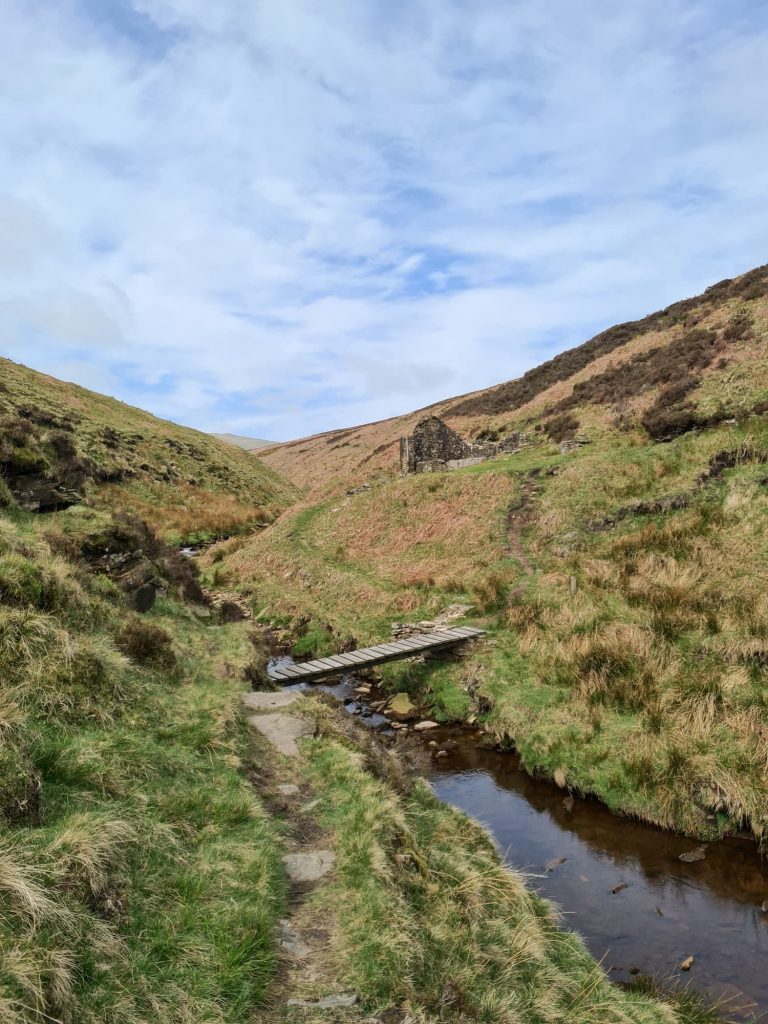 A bridge over the River Ashop

After having a quick snack on the big rock next to the river, we started the climb up. We followed a faint sheep track up the left of the stream as far as we could.. There isn’t a path as such going up Nether Red Brook – it’s a case of winding over the boulders and rocks, avoiding the water and climbing up. It’s great fun! We had to climb up parts of it, especially near the top where there are larger steep sections and I had to give Hols a leg up. 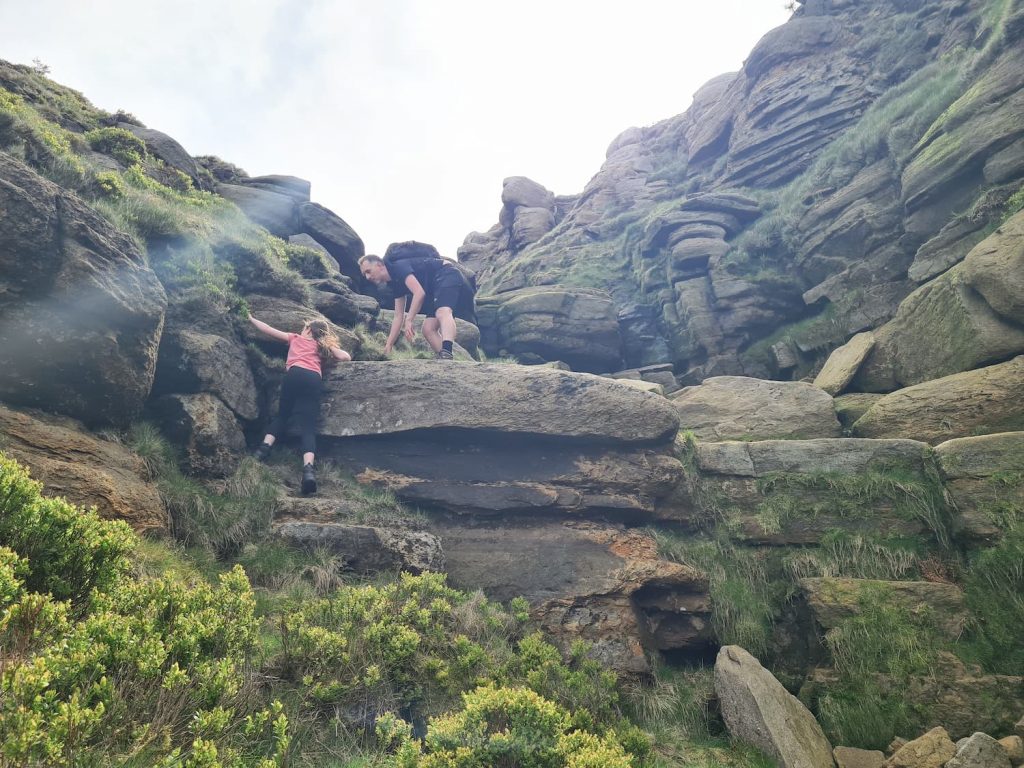 Just a note about scrambling with kids – I know you’re all responsible adults reading this, but just in case! We always choose a dry day and research our routes as much as we can. We’re pretty physically able to climb, and Joel and I are always on hand to help Hols if she needs it. We also choose scrambles that are feasible for us, but not anything over a Grade 2 as we don’t have the skills or the kit for this. It’s important to know your limits with things like this as it’s a long way from help.

After we’d reached the top of Nether Red Brook, we followed The Edge for about half a mile before heading across the moors to The Edge trig point. At 624m, this is one of 3 Kinder Scout trig points (with the others being Kinder Low and Edale Moor) but there are actually 2 trig points here – the original one fell over at some point in the past and has been replaced. It’s not often you can touch 2 trig points at the same time! 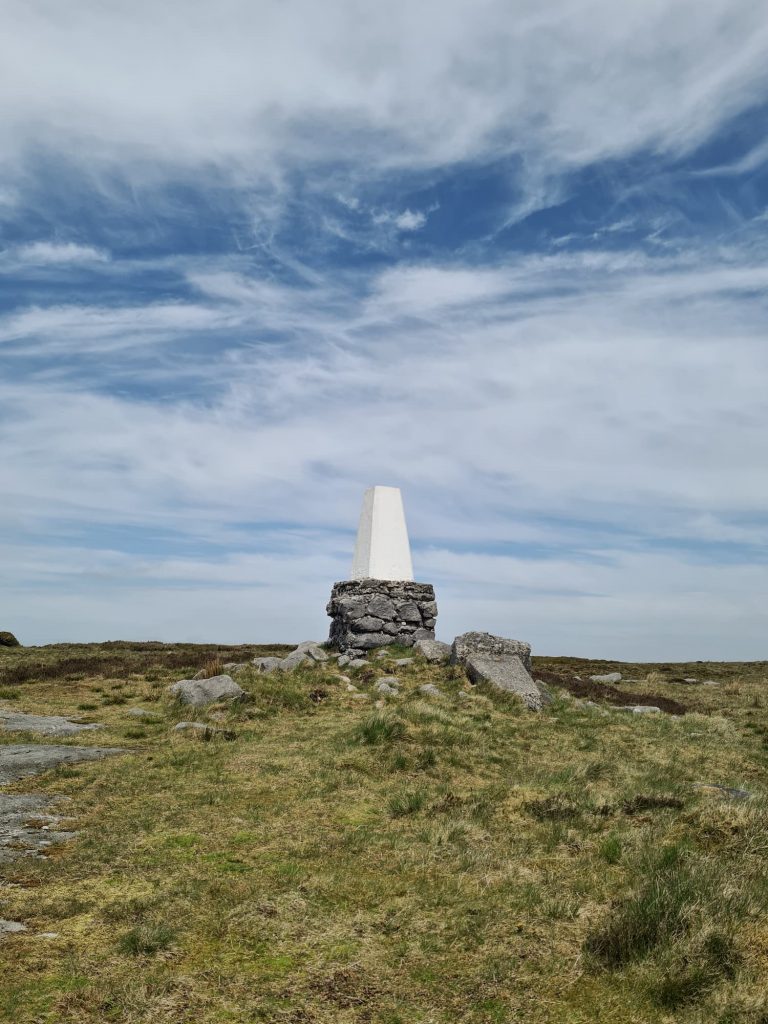 Two trigs for the price of one at The Edge! 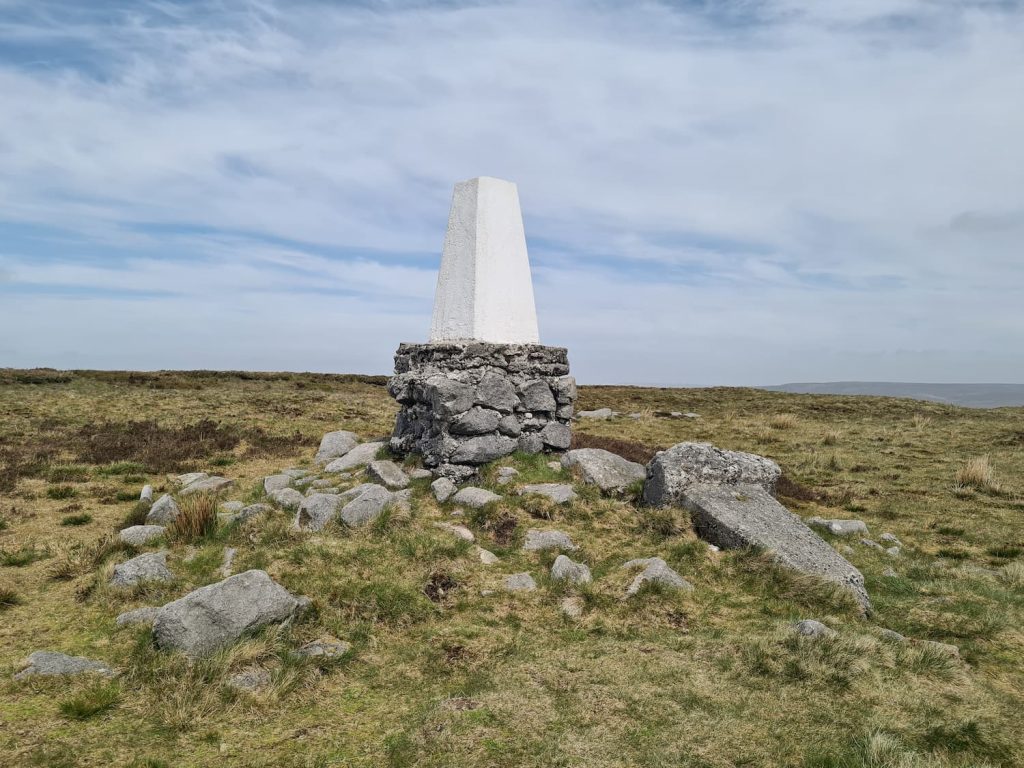 From The Edge trig point we headed down to the main path to wind our way round to Kinder Downfall, the highest waterfall in the Peak District with a drop of some 30m. In summer this is little more than a trickle, but in wet weather and strong winds the water in Kinder Downfall blows upwards, which is quite a sight! It can also freeze over in a cold winter. 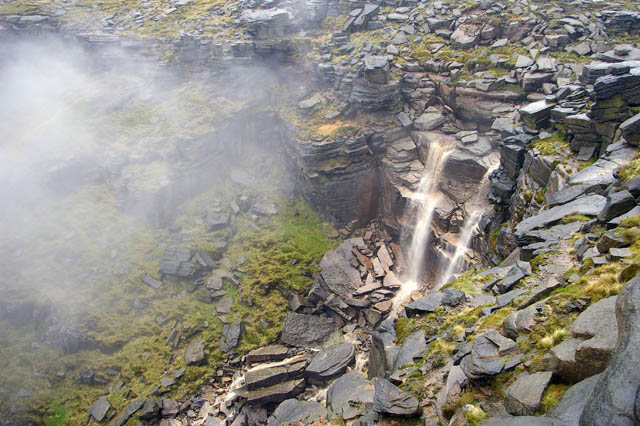 We visited the top of Kinder Downfall, which was really busy with people having picnics, flying drones etc. If you want to have a picnic but want somewhere quieter, head along the River Kinder a short distance from the waterfall and you’ll have the place to yourself. 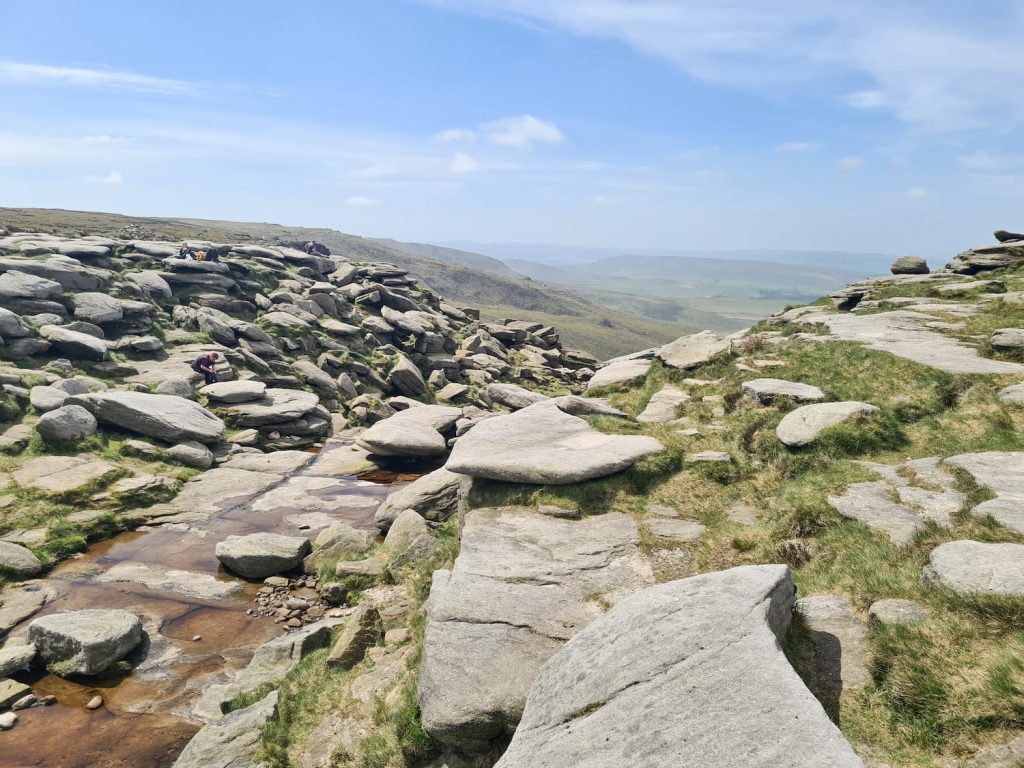 The top of Kinder Downfall. It’s a very popular picnic spot – just out of shot there were about 50 other people!

We followed the River Kinder for a short distance then headed off across the plateau to Fairbrook Naze, at the top of Fair Brook, which is in itself a lovely scramble. This is a navigational challenge as you are up and down in the peat groughs and it’s easy to get disorientated, especially in bad weather. Fair Brook was our route back down to the car, and is a beautiful place to explore. Following the course of Fair Brook back down the valley, we passed a series of waterfalls and natural pools – perfect for a paddle on a hot summers day. There were a few people paddling and wild swimming so I don’t have a lot of photos unfortunately, but it’s definitely somewhere we’ll explore again. 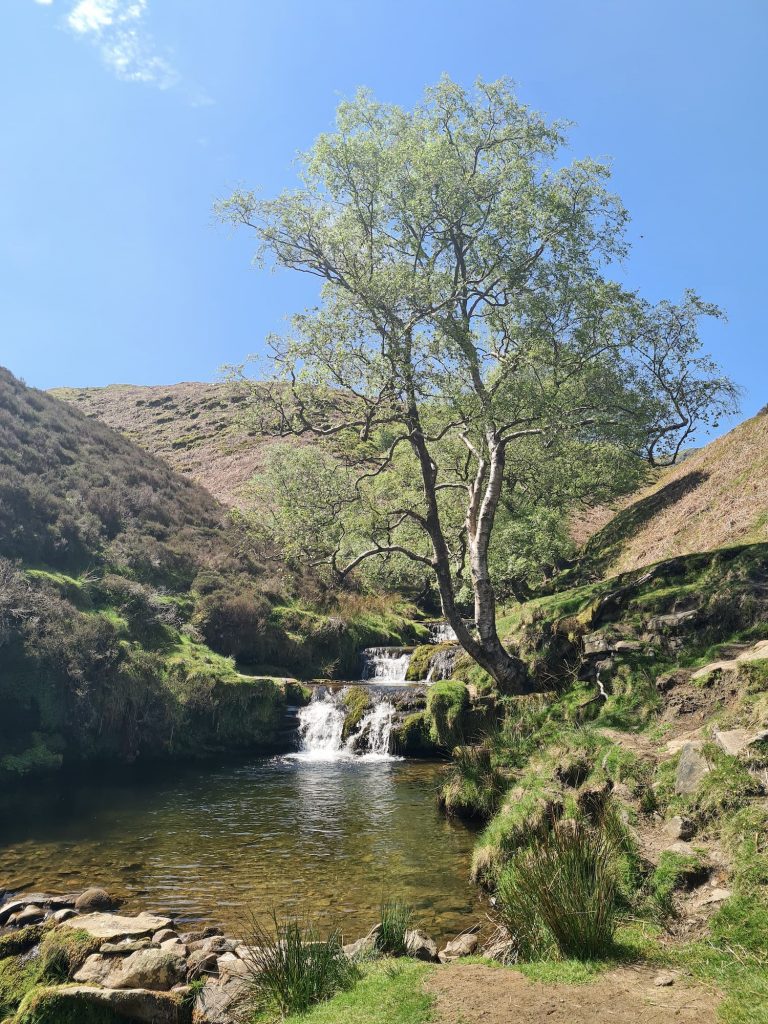 This Kinder Scout waterfall walk is a lovely one to do on a hot day, but should only be attempted if you are confident navigating over bleak, featureless moorland. It can be easy to get lost on Kinder Scout as the weather changes quickly. For an easier route to Kinder Downfall, on clearer paths, check out the Hayfield to Kinder Scout circular walk.

Difficulty: ▲▲▲ – this route involves a scramble and is navigationally challenging

You can get the GPX file for this walk by clicking on the map and downloading it from Komoot.