This Dovestone Reservoir to Alphin Pike circular hike is a perfect Autumn walk in the Peak District. Taking in the reservoir, waterfalls, woodland, moorland, amazing rock formations and Alphin Pike trig point, there’s something for everyone. The walk has a couple of challenging parts but is definitely worth the climb. 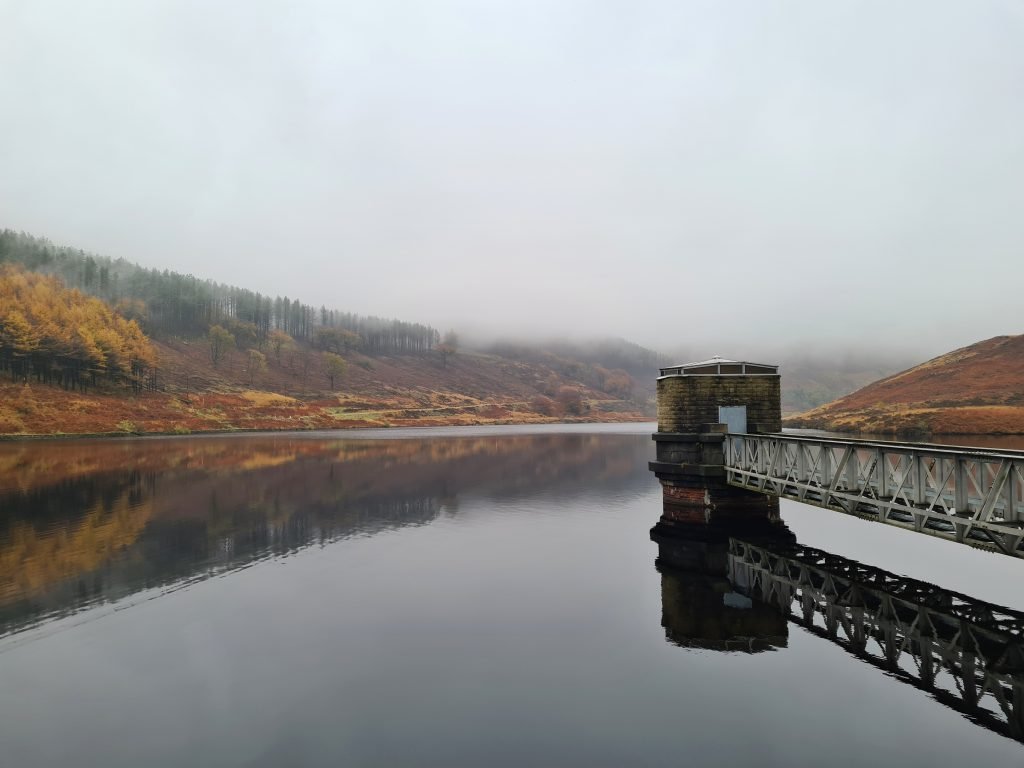 Alphin Pike is a trig point on the north-west boundary of the Peak District. At 469m above sea level it’s pretty high but isn’t actually the highest part of this walk, with that being Hoarstone Edge at 497m. The climb up to Alphin Pike is pretty steep, but once you’re up it’s pretty level going.

We parked at Binn Green car park and walked through the woods down to Dovestone Reservoir. Our plan initially was to head to The Trinnacle and up to Ashway Moss but the paths were closed by a grouse shoot so we had to change tack. Following the western edge of Dovestone reservoir, we headed past the Sailing Club and past the Chew Piece Plantation. 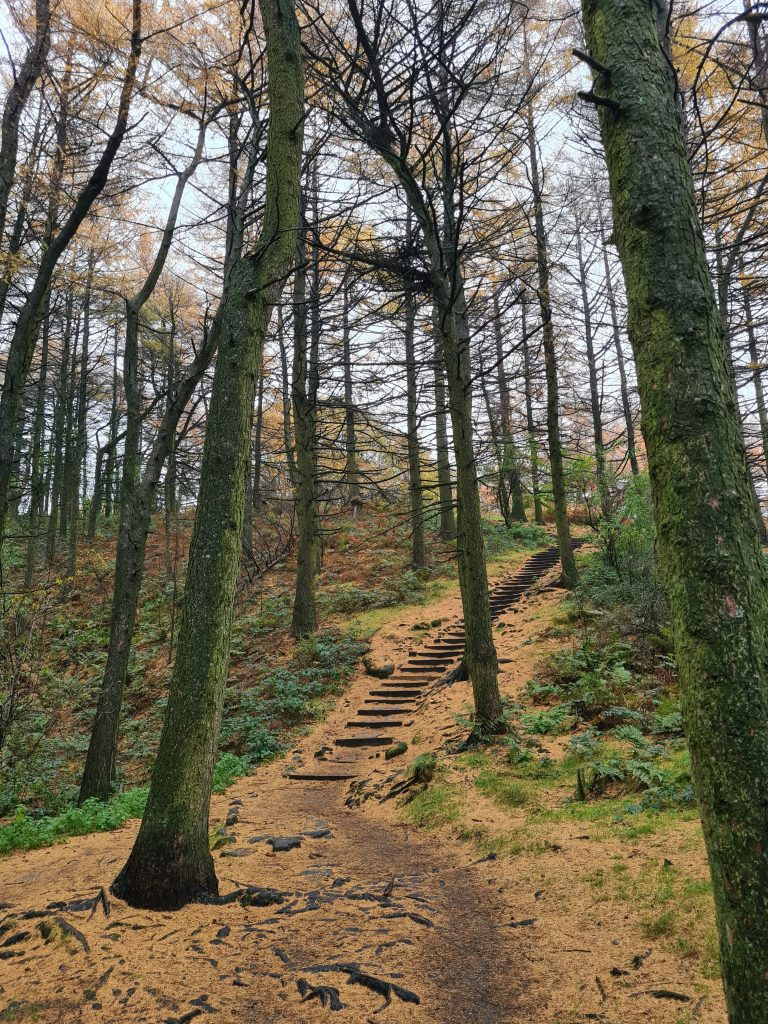 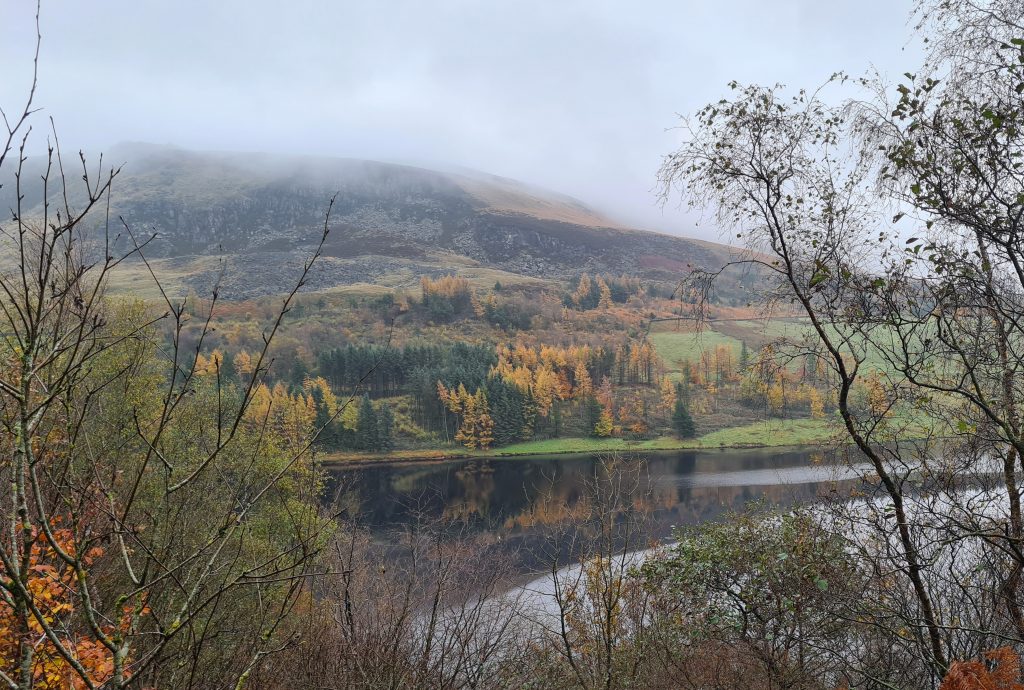 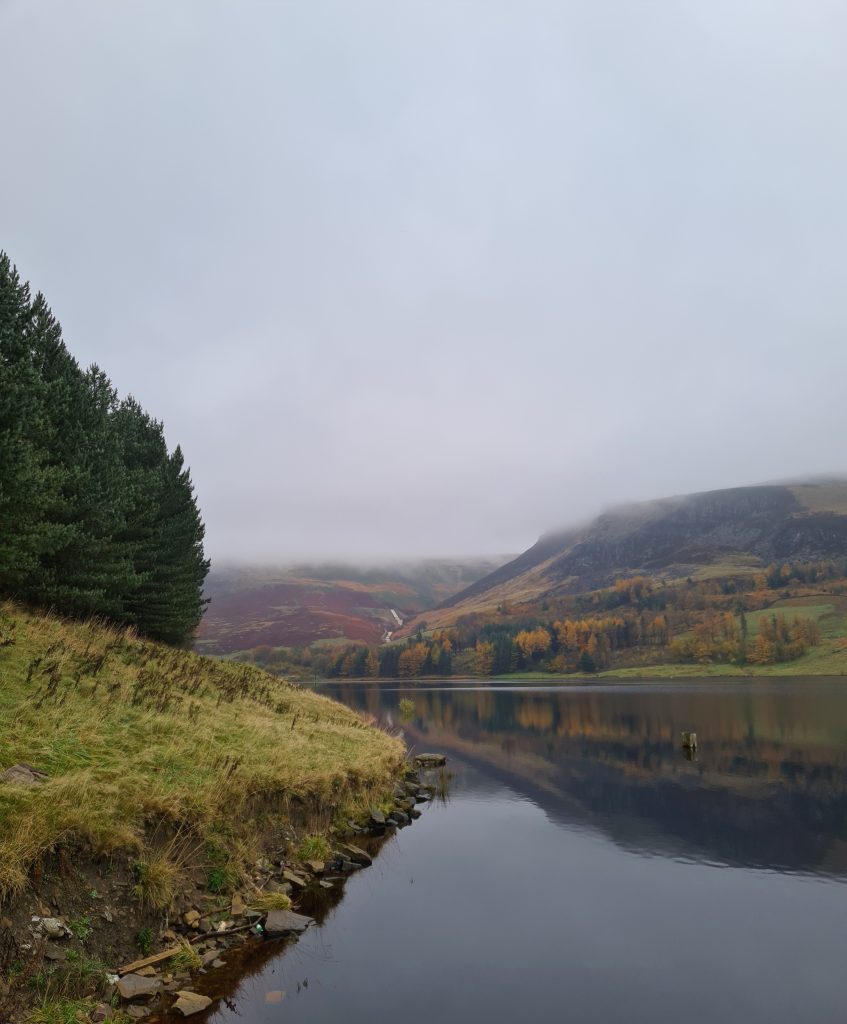 Turning west, you’ll leave the woodland and be out onto moorland farmland. It’s a bit boggy here in wet weather. Before you come to the next gate into woodland, turn left and head up the hill by the edge of the wood. It’s a steep hill, but levels out. After about 250m you’ll see a path leading up the hillside. This is unfortunately the way up to the trig point! It’s really steep and has a few spots where you may have to scramble up as there are loose rocks. 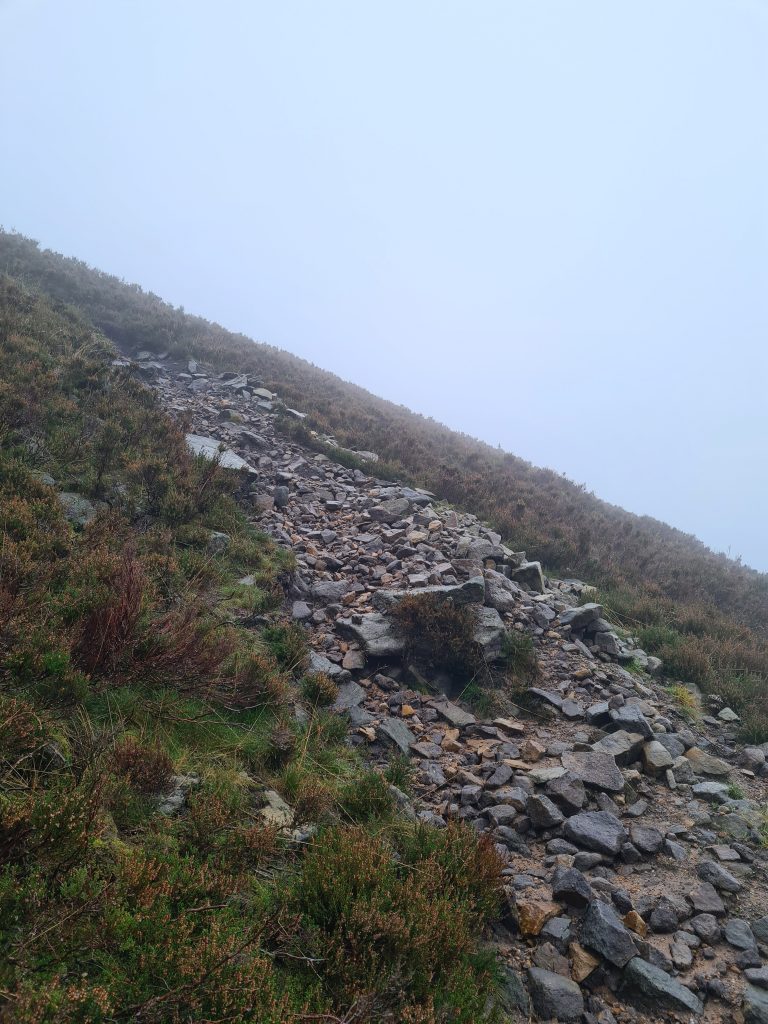 The path up to Alphin Pike trig point. It’s a bit loose! 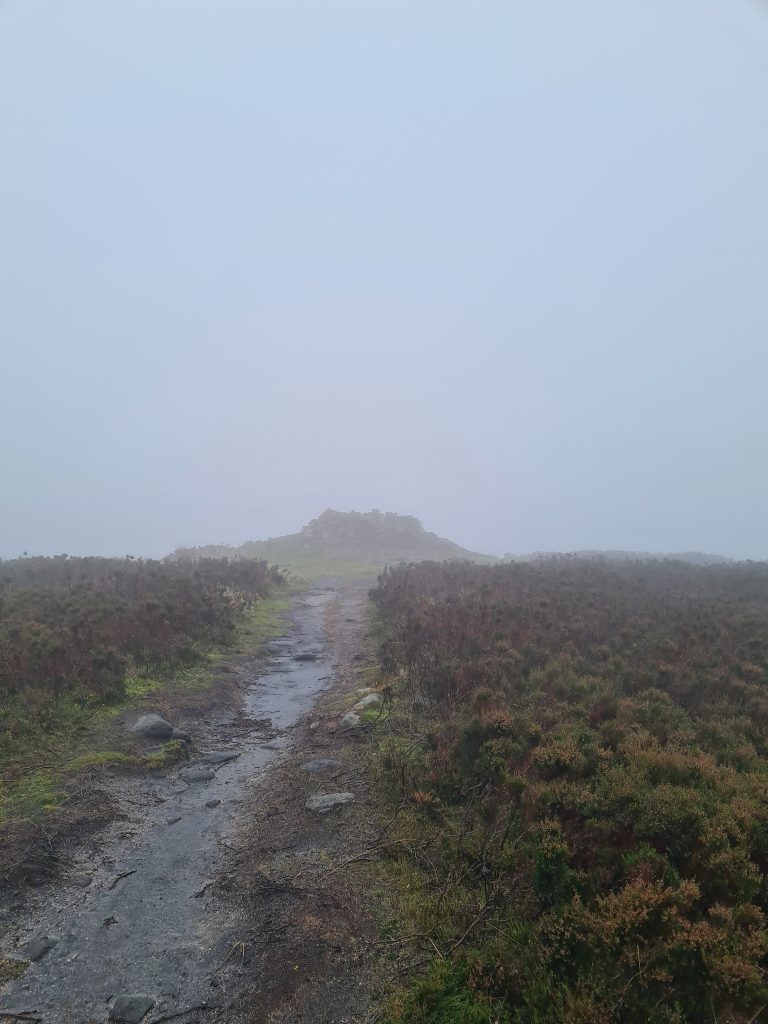 After the slog up the hill you’ll come to a big cairn which is hiding the trig point. This is a trig point even I could get on! 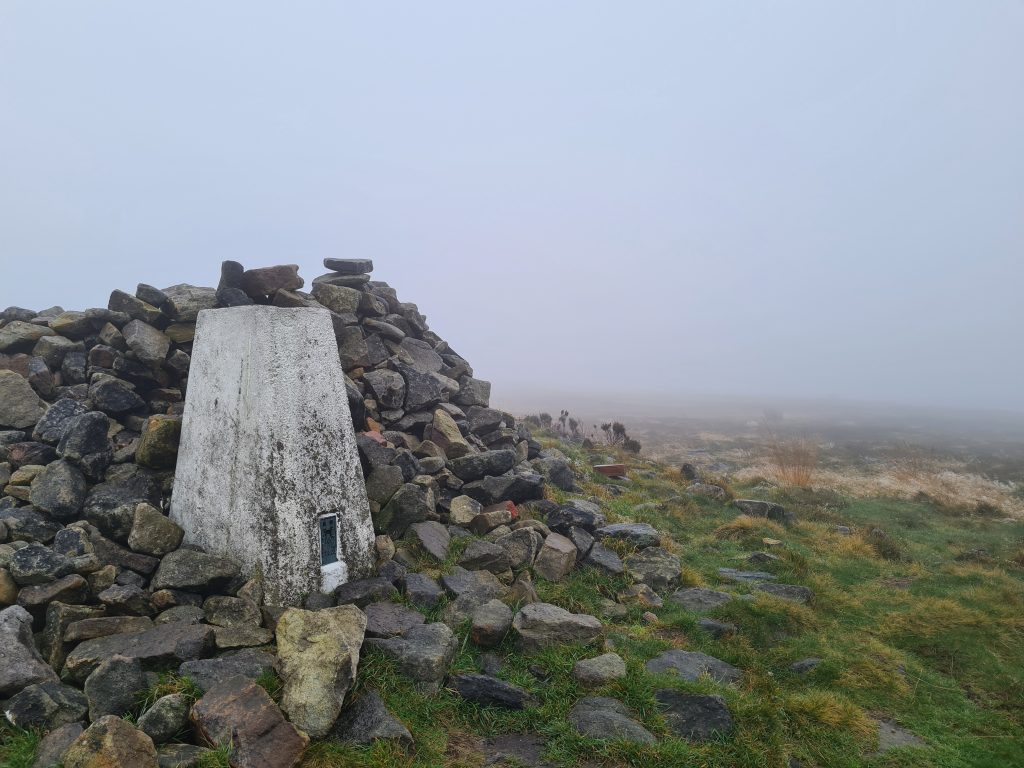 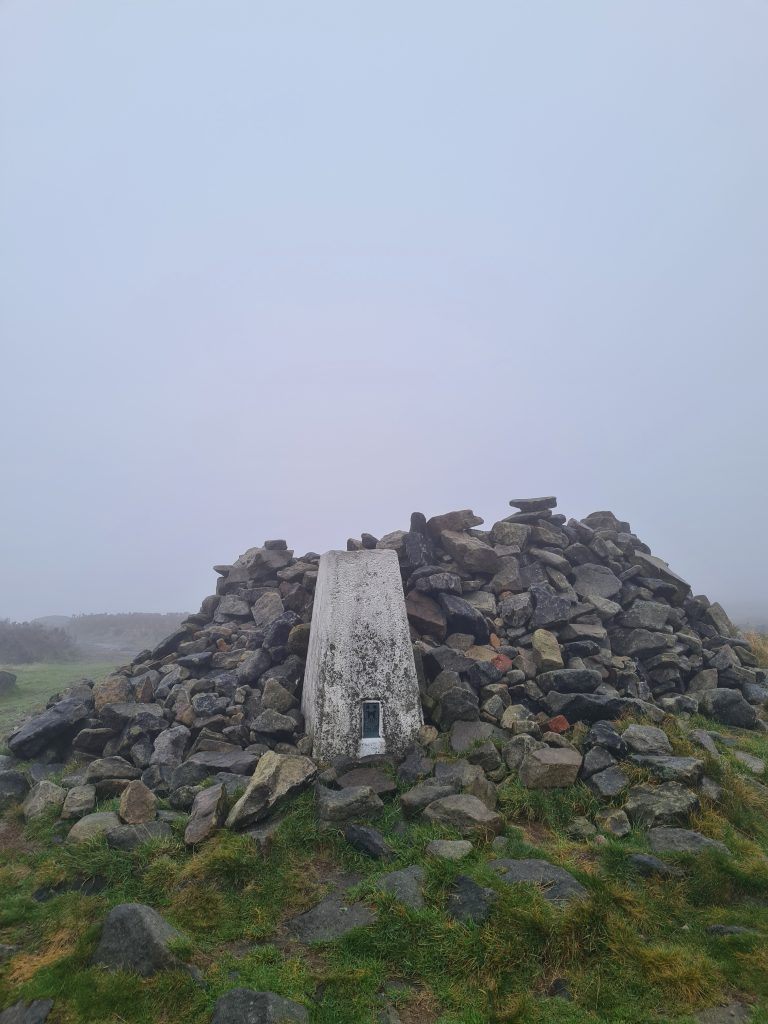 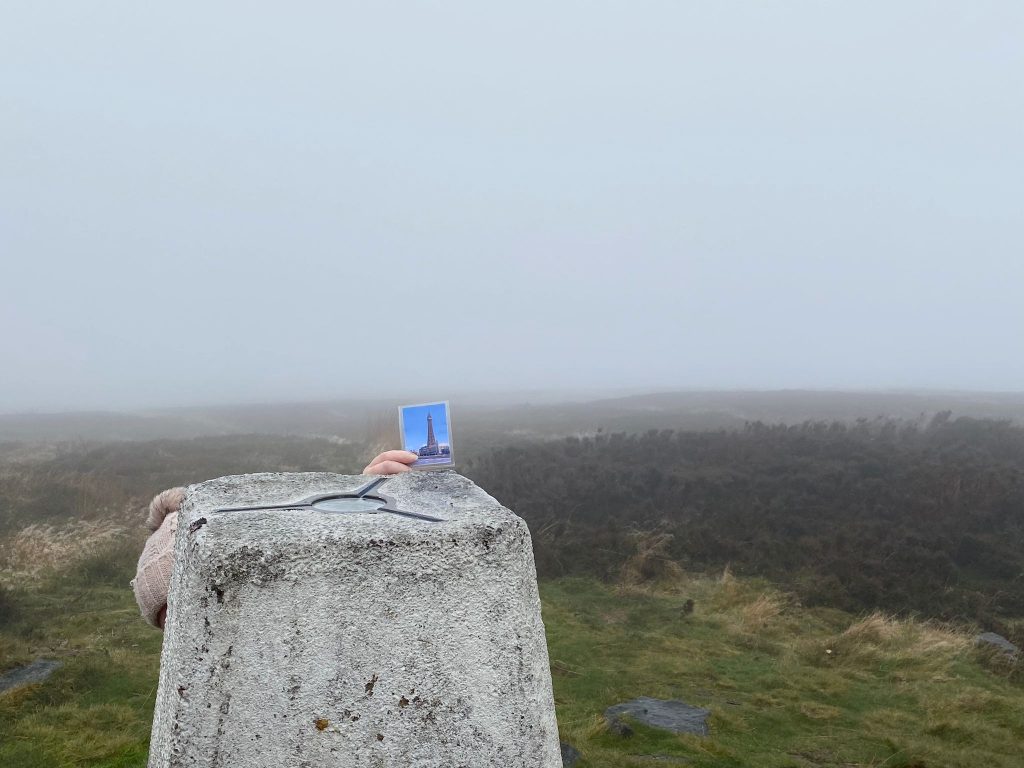 After the photos at Alphin Pike trig point (including a rare glimpse of Blackpool Tower, which I’m always told you can see from these high places but I’ve never seen it yet!) we headed off along the top of the hill over Slack Head Brow. 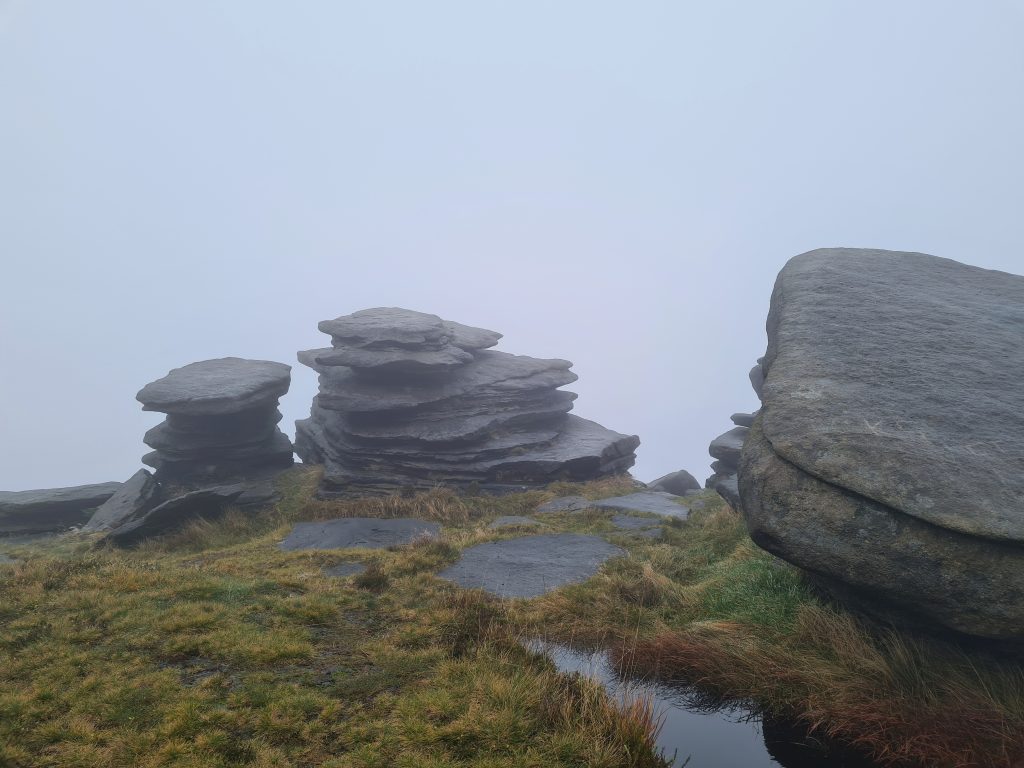 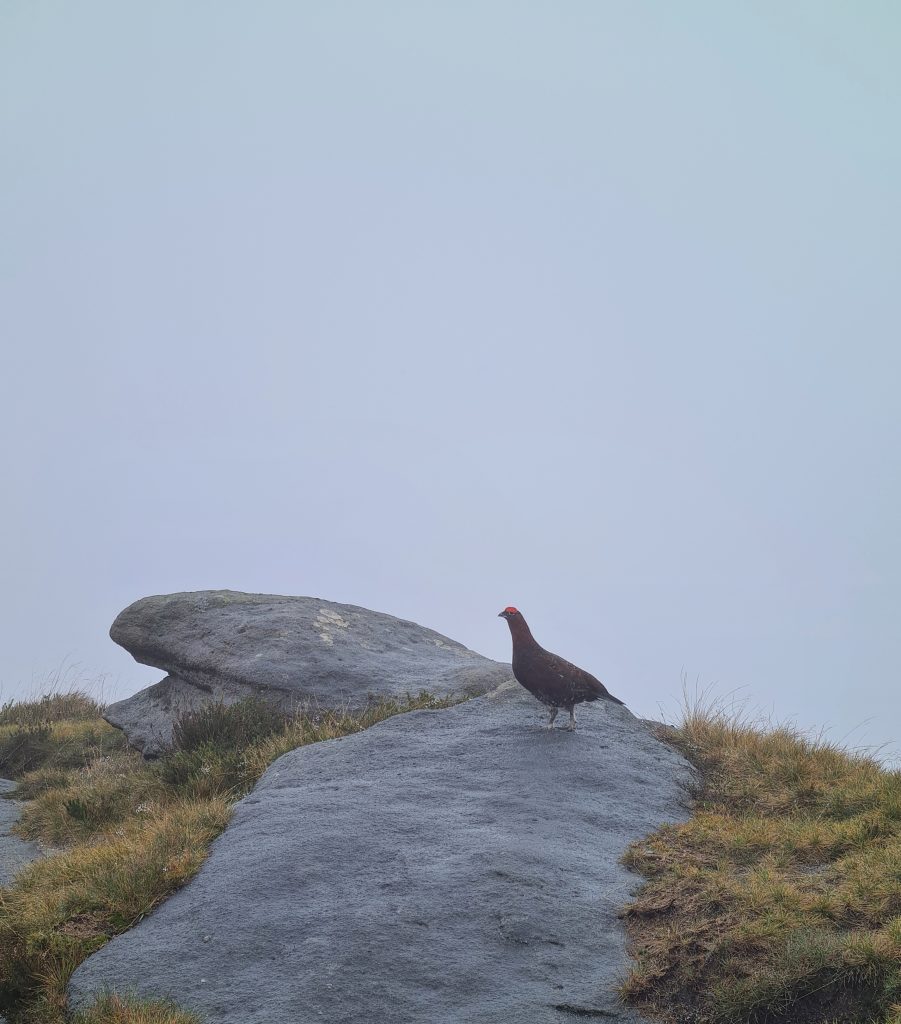 I’m sure the views from here are amazing but as is usual on our hikes, all we had was mist. Lots of mist. The summit of Hoarstone Edge is just open moorland – there’s nothing to mark it.

The path eventually comes to the western edge of Chew Reservoir (you can see photos of what Chew Reservoir should look like on Crowden to Featherbed Moss Trig Point – it was hidden in the mist for our walk.

We took the roadway down into the bottom of the valley again and then diverted off the road to explore the old Chew Valley train station. Used for transporting clay up the valley when they were building Chew Reservoir, there’s not much left now other than a wall and a nice flat path. 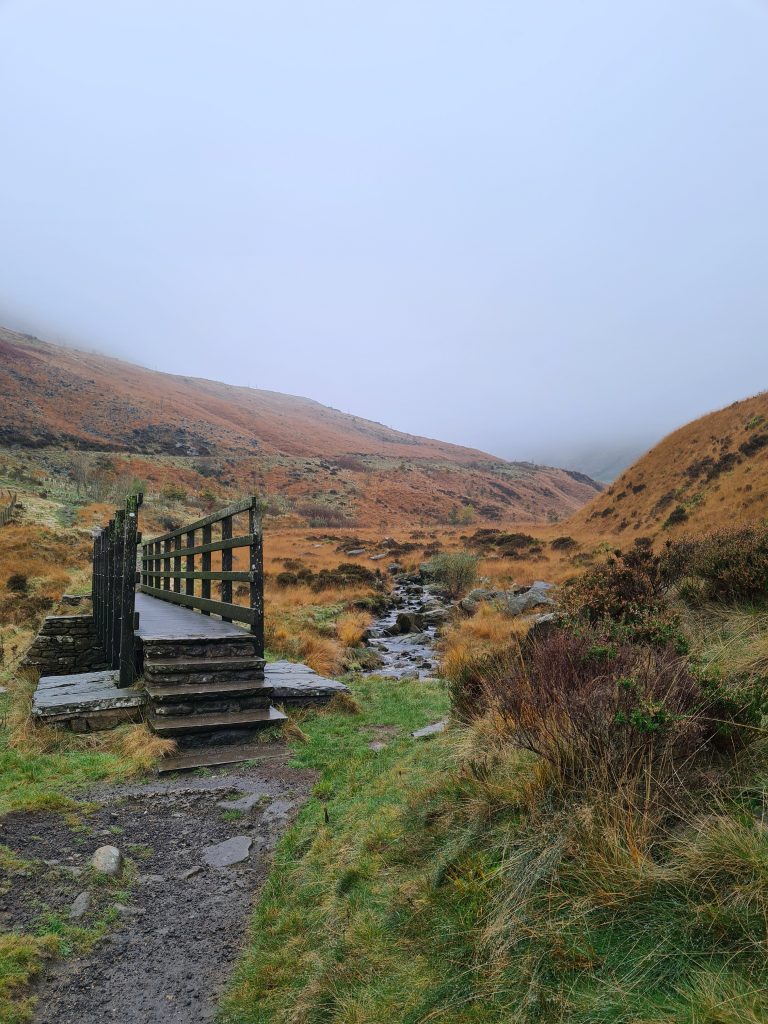 Footbridge over Chew Brook near the disused Chew Station

We followed the Oldham Way alongside Chew Brook, then headed back through the Chew Piece Plantation. 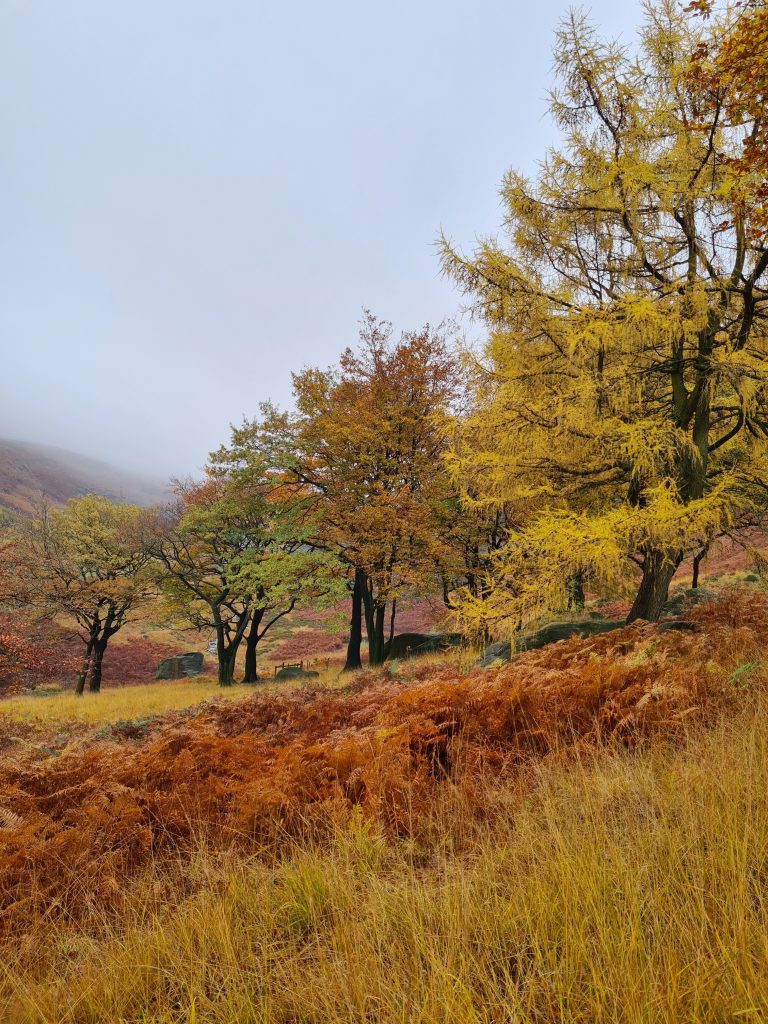 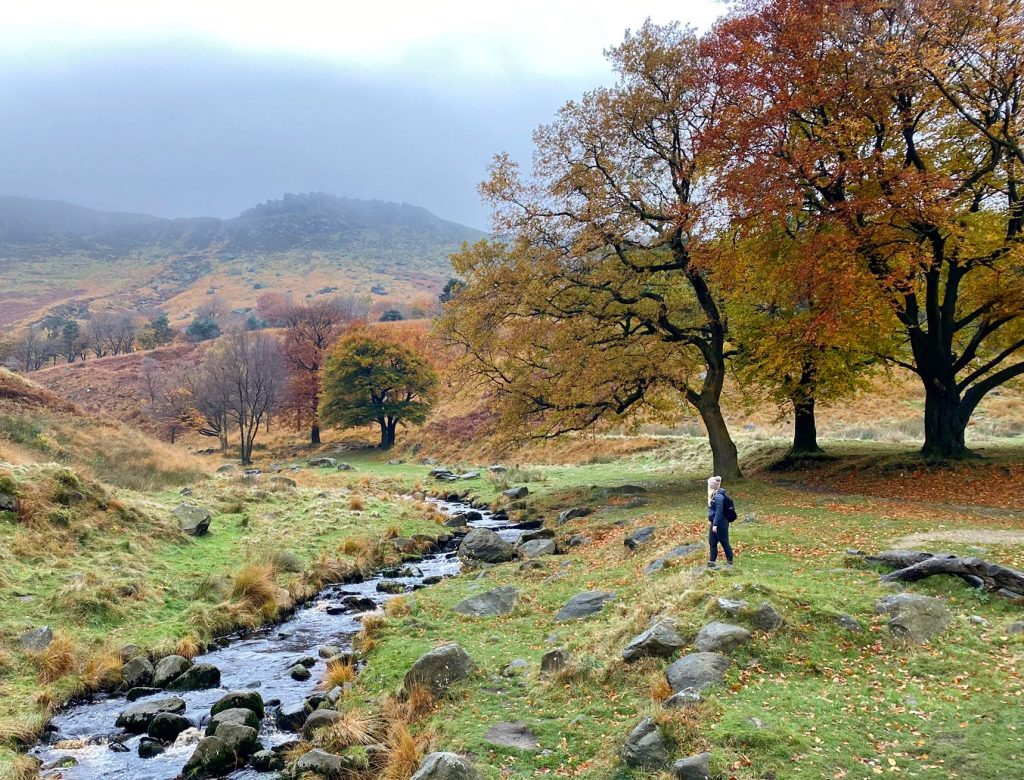 We walked around the eastern edge of Dovestone Reservoir and over the walkway between that and Yeoman Hey Reservoir, then back up the lane and through the woods to the car park. 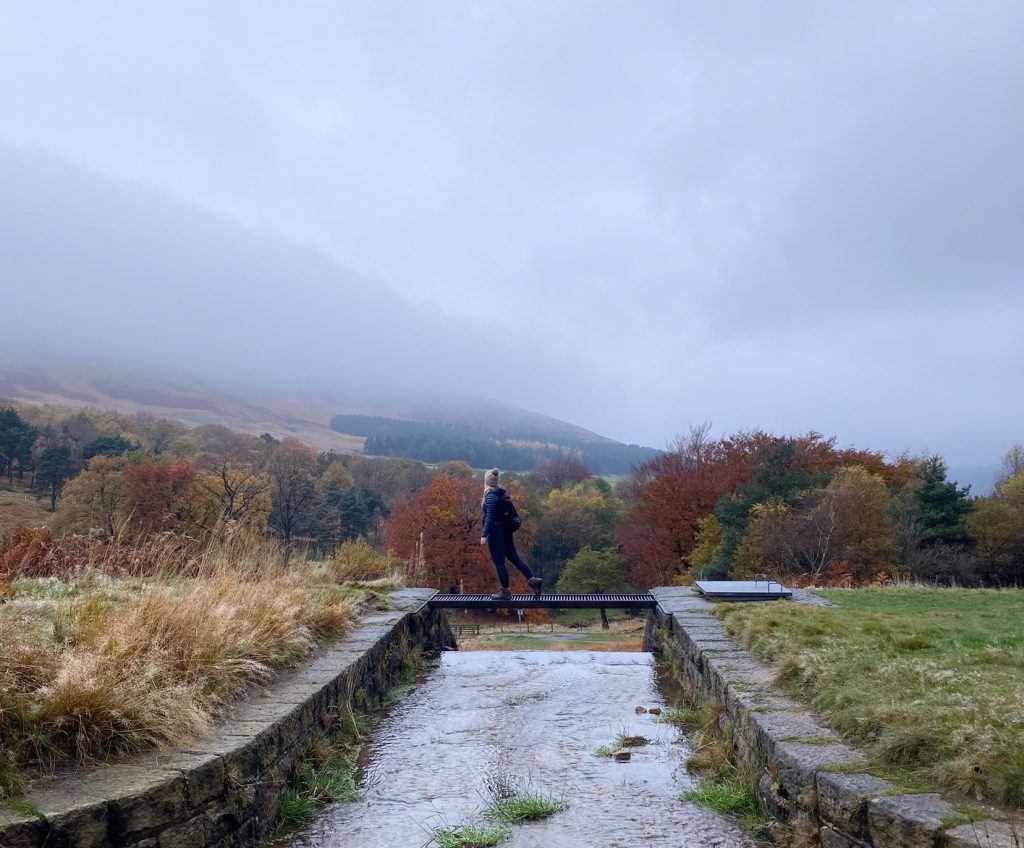 Foot bridge over the reservoir channel

There was no pub nearby so we jumped in the car and headed to The Huntsman on Greenfield Road. 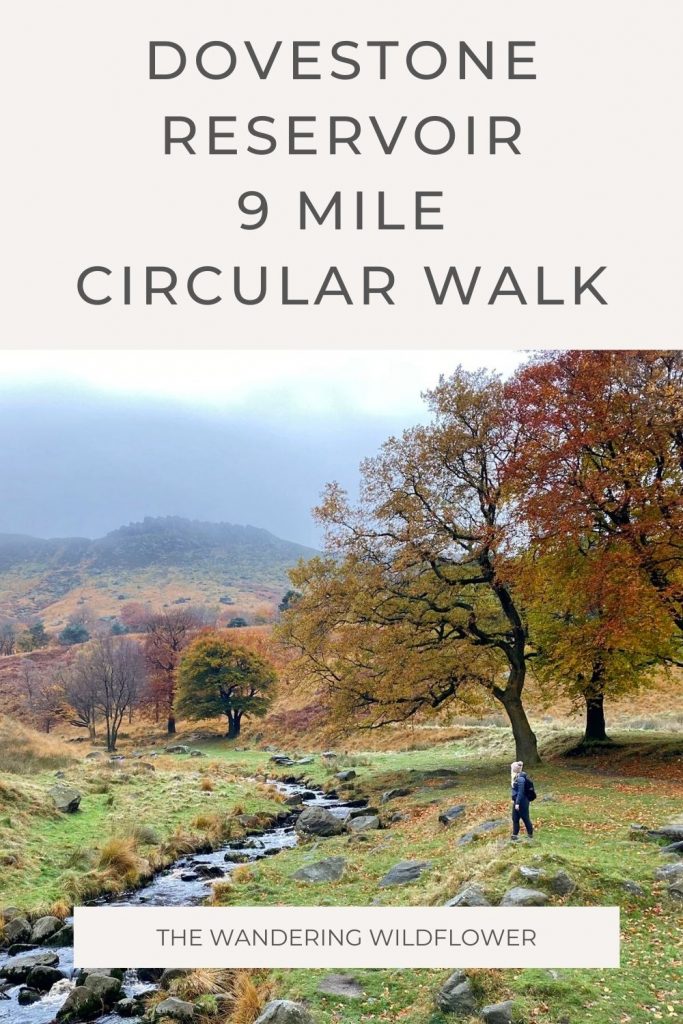 Parking: Binn Green Car Park, just off the A635 at Greenfield.

This was a lovely walk, and despite the weather this is one of my favourite Autumn Peak District walks. For more walks in the Peak District, or trig point bagging walks, why not follow the blog?